This past week Victoria’s mayor and Victoria’s city council passed a motion 8 to 1 to consider establishing a designated tenting area in Topaz Park for Victoria’s homeless population. Since then, there has been a public outcry about the proposal –because a “designated temporary tenting area” by another name is a “tent city”.

At first blush, it would seem to be a quick and inexpensive fix to the problem. The homeless need shelter, a tent provides shelter and a designated tenting area has to be better than random encampments throughout the city – doesn’t it? Why not use a city park to provide land for the shelters of the homeless?

It really is rather incredible, that a problem as intractable and pervasive as homelessness has such an easy fix. After all, if the problem was as easy as a “temporary tenting area” why has it not been tried before? (Never mind that the “tent cities” that sprung up at the Cridge Center, St. Ann’s Academy, Beacon Hill Park in the past were unmitigated disasters that cost nearly a half-million in policing costs – but those were “tent cities” not formally “designated temporary tenting areas”).

After all – what could go wrong with congregating a population that has a high incidence of addiction, mental health struggles, and various other problems in a public park? What could go wrong with failing to provide showers and food and adequate washroom facilities (never mind the intensive counselling and assistance many of these people would need to actually end their struggle with homelessness)?

This idea deserves a "Public Policy Darwin Award" - for taking a serious problem and making it worse.

Posted by Mrs. W. No comments: Links to this post

This past weekend, their dream turned into a nightmare. While at Sun Peaks, her fiancé was celebrating the upcoming nuptials with close friends. On the walk back to where he was staying, at about 3am on Sunday July 19, 2015, he was struck by a truck and sustained severe injuries.

The bride-to-be is now sitting by her fiancé’s side in a Kamloops hospital room. Praying, pleading for his health; he is in serious condition. The bright future that laid ahead for the couple, just a few days ago – now seems incredibly uncertain. The months ahead will be focussed on recovery and healing – coping as best as possible.

The prospect of the future is made even more uncertain as the person responsible for his injuries remains at-large. The driver of the truck that struck him did not remain on the scene and has not come forward – making a tragic and heartbreaking situation an order of magnitude worse.

Pushing Back for the Best Choice - Cesarean by Choice in Canada Deserves Respect, Compassion - Not Mocking

Canadians, and Cesarean by Choice moms in particular, should be outraged at what is considered to be appropriate behaviour by research institutions and hospitals in Ontario. A website has been created - www.pushingforthebestchoice.ca - and supported by the University of Ottawa, McMaster University, the Canadian Institute for Health Research, the Canadian Health Services Policy Research Foundation, Markham Stoufville Hospital, and Queensway Carleton Hospital. It is deeply offensive and mocks patients while purporting to "Push for the Best Choice". 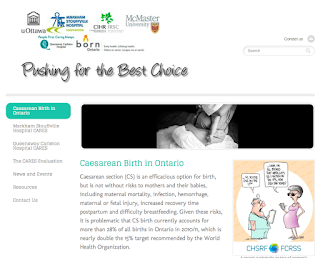 Caesarean section (CS) is an efficacious option for birth, but is not without risks to mothers and their babies, including maternal mortality, infection, hemorrhage, maternal or fetal injury, increased recovery time postpartum and difficulty breastfeeding. Given these risks, it is problematic that CS birth currently accounts for more than 28% of all births in Ontario in 2010/11, which is nearly double the 15% target recommended by the World Health Organization.

I should note that vaginal birth (VB) is also an efficacious option for birth, but is not without risks to mothers and their babies, including maternal mortality, infection, hemorrhage, maternal or fetal injury, increased recovery time postpartum and difficulty in a wide variety of areas. But this article completely neglects the risks of vaginal delivery - and then proceeds to declare the prevailing rate of cesareans as problematic, while trotting out the WHO's zombie statistic that was quietly retracted in 2009 as having no evidence to support it only to be brought back to life this past year, despite having questionable evidence to support it. There is no "ideal cesarean rate" - and despite wide criticism this number continues to pervade popular media and policy circles alike.

The common perception that this large and increasing proportion of CS births is attributable to maternal requests for CS does not reflect the available evidence, particularly in a Canadian context. Maternal factors that are more likely to contribute to the increase in CS birth include increased maternal age, use of assisted reproductive technology, incidence of obesity and gestational diabetes. While these maternal factors are likely attributable to changes in sociodemographic and health status in developed countries, of particular concern are the obstetrical practice changes that have led to an increased use of technological intervention during birth. Such interventions (including increased use of labour induction, augmentation, epidural analgesia, and electronic fetal monitoring) are associated with an increased risk CS, even in cases of otherwise low-risk birth.

I agree that maternal factors (changes in the incidence of medical indications for CS) likely contribute to the higher rates that are observed in Canada. However, the article then goes on to criticize the use of technology in birth. What the article fails to consider is what happens in the absence of that technological intervention. More stillbirths (rare, but the incidence of still birth increases after 39 weeks), more neonatal asphyxia, more 3rd and 4th degree tears (and likely more pelvic organ prolapses subsequently), more PTSD as a result of extreme and uncontrolled pain... but, I guess all of that is justified to achieve a higher rate of vaginal delivery. Given the choice between many of these outcomes and undergoing a cesarean - many women would choose the cesarean and the use of technology as it best meets their needs.

Despite evidence of effective individual strategies to curb inappropriate childbirth interventions that focus on either patients, maternity care providers, or hospital policies, little is known about the cumulative effect of a multifaceted strategy to reduce CS birth.

Inappropriate by whose standard? Is it inappropriate to respect patient autonomy? Is it inappropriate to avoid the worse set of outcomes by minimizing their risk and increasing the risk of cesarean? Inappropriate to provide adequate pain relief? Little is known about the cumulative effect of a multifaceted strategy to reduce CS birth - but it is absolute foolishness to think that such a strategy is going to come without some harm. Maternity care needs to focus on what really matters, and that is not "mode of delivery" - it is healthy and happy outcomes that best meet the needs of individual mothers and babies.

As a final slap in the face, a cartoon accompanies the article (below) - a complete caricature of a doctor and a patient making a medical decision. Under the cartoon is the disturbing statistic - 10 percent of mothers (without prior cesarean) would choose it, fewer than 2 percent of mothers actually have a cesarean as a result of maternal choice. 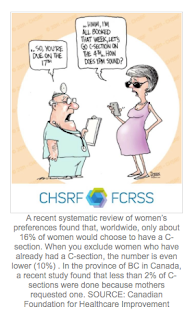 Posted by Mrs. W. 6 comments: Links to this post

Mrs. W.
A Canadian woman living in Victoria, British Columbia, a mother and step-mother and an economist who is keenly interested in making birth better for women in British Columbia by supporting and fighting for the right to informed consent, patient autonomy, and timely access to medical care. My choices may not be the same as yours, but I fully respect and support your right to make them given adequate information.